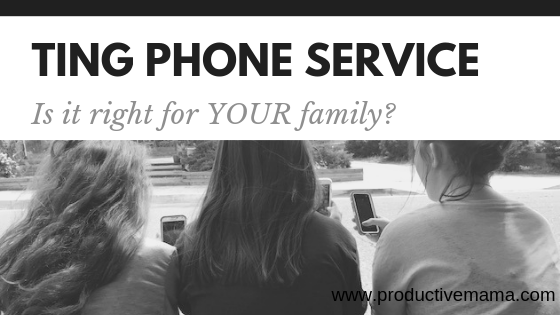 Wondering if Ting, the discount cell phone service, might be right for YOUR family? I’ll outline all the pros and cons of Ting, my family’s phone bill amounts and how to find out what YOUR bill might be if you switch.  Once you start adding your KIDS to your phone bill, it really adds up.  Ting is a great option.

This post may contains affiliate links, which means that if you click on one of the product links, I might benefit in some way.  But so will you!  You’ll get $25 off with Ting.  Please feel free to check out the full affiliate statement and disclosure here.

It took me a good, long while to break up with Sprint.  I KNEW I was paying a lot for two phones, but I was nervous about moving away from one of the “major” phone companies.  First I cut back from our “unlimited” plan to 1G of data per month and that saved me $20/month.  But when our contract was up, I made the jump.  I just couldn’t justify NOT switching when I knew I’d be saving possibly thousands in one year.

We actually wanted to stay on the Sprint Network (on which Ting runs) because The Captain apparently gets better reception than most where he works and NEEDS his phone to work well when he’s at work.  Apparently Ting also runs on T-Mobile, greatly expanding its area for talk and data.  {JANUARY 2020 update: Ting now runs on Sprint, T-Mobile AND Verizon, covering you from coast to coast.}

What WERE We Paying?

Before I switched we had 2 phones, “unlimited” talk/text/data and paid about $170 per month.

What are we paying NOW? 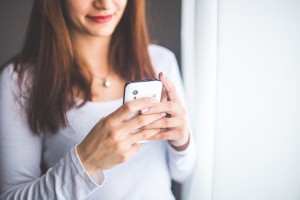 How Else Can You Reduce Your Cell Phone Bill?

Of course, I still want to keep our bill low.  SO WE ENCOURAGE JUDICIAL PHONE USE. I put the phones in airplane mode at night and insist the kids use wireless whenever possible.  If your phones have the feature to use wireless first for phone calls, USE THAT, as well. I’m also encouraging the kids to send texts with photos (which are charged as data) only when on a wireless network.  I like to think these things help a little bit.

How Else Does Your Phone Usage Impact your Cell Phone Bill?

We don’t stream movies.  If you regularly stream movies over a cellular connection, Ting might not be for you.

The teens mostly text, The Captain uses the most minutes (for work), and I use the most data.  That means as a family, we fall into the Medium “levels” for talk and text, but in Large for Data.

How much will YOU Pay on Ting?

With Ting, you PAY FOR WHAT YOU USE.  To find out where your family might fall, visit Ting and check out their Rates and Savings Calculator.  Find an old bill and enter your numbers into the calculator.  I think you’ll be surprised.

Have your own phone? Need a new phone?  Want to upgrade?

When I first switched, I wanted to bring our own phones. It was painless to get three phones activated and working right away. If you like getting the newest phones, subsidized by a more expensive plan, this won’t be for you.

We pay for our phones outright.  This is a big up front expense, but still made worthwhile by the phone savings. I was paying around $170 previously for TWO phones ($85 per phone). At $23 per phone (which is an increase from when I first joined Ting, but we’ll be conservative here), that’s a savings of $62 per month. $62×12=$744 in savings per year FOR ONE PHONE, which is more than I would pay for a phone and I don’t upgrade every year. Definitely worth it. $744×2 = $1488. So if this is a concern, put aside some of that savings for your next phone purchase.

I’ve moved at least five phones to them over the last few years and they make it EASY. I’ve purchased two phones from them at competitive prices.  I could have possibly saved some, but they make it TOO easy by being so very helpful.
Any time I’ve had to reach out to them, they’ve been professional and courteous.  Also, they are based out of Jackson, MS and provide jobs right here in the USA.

Reliable.  I’ve never noticed any major outage.  My phone works when I need it to.
One caveat:  no data roaming.  So if you travel outside of T-mobile or Sprint’s areas and need to check Yelp for a local dining suggestion, sorry.  I usually carry along my Karma hotspot for that!

And the bottom line:  they’re cheap!

Ting would be a fantastic option for ANYONE, but especially someone who wants an “emergency” phone for a family member.  Or an extra home line or a shared phone for kids.  That would cost just $6 per month.

Switch to Ting with this link and get $25 off your first bill(s)!

Watch as I share what most of you are paying for your cell phones and how to determine if Ting might be right for you.

Summary of Pros and Cons