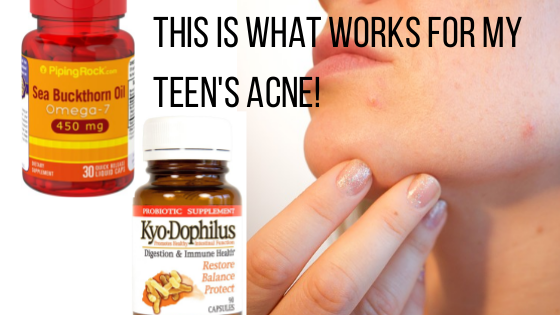 This is a little out of my usual scope, but lately I’ve discussed “what’s helped my daughter’s acne” with a few people and realized it might help some of you, too.  I fully believe that there are SO MANY POSSIBLE solutions for acne but that each person’s is different.  As someone who suffered with acne, I was very sympathetic to my daughter’s plight.  Telling her what worked for me wasn’t helpful, since I think we can all agree that pregnancy is NOT the answer!
Her acne started when she was 11-ish.  It appears almost exclusively on her upper forehead, near her hairline.  The hippie in me had us trying several natural remedies that didn’t work for her (honey, avocado, yogurt, banana and other yummy face masks), in addition to our cod liver oil and traditional foods diet.  We’ve also tried the light masks, which didn’t help, though we gave it a few months.  And she has also always used a Norwex body cloth on her face.  That was one of my first efforts with her that didn’t work on its own, but she keeps it as part of her regimen.
The first thing that made a significant improvement in her acne was this probiotic:
It was by pure chance.  I don’t remember WHY I picked this one. I do remember thinking “well it only has three strains, that’s not so hot.”  I think I was looking for something that was more affordable than what we had been using previously.  And I think I had just read some book on gut health that listed various strains.  Anywhooo, I bought it.  She started using it and wow, it made an impact.  A few years later, I asked if we could try another (cheaper) probiotic.  Maybe her situation is overall better?  We did.  Bad idea. We are now confident that Kyo-Dophilus is part of her solution and buy the 120 count! A male friend also tried this and had success.
This did not clear things up 100% (maybe 85%, which is still HUGE) and we also started using the AcneFree system (available just about everywhere).  I wasn’t thrilled about this but when kids suffer from acne, it’s not just the physical discomfort of the skin. There’s suffering. And I felt for my girl.
Eventually, she decided to start ADDING oil to her routine and has found some blend that she feels works for her.  Mostly argan and jojoba.  So now she uses the AcneFree in the evening, water and the Norwex cloth followed by oil in the mornings. She still had breakouts (again, mostly upper forehead), though nowhere near like before and definitely influenced by hormones and stress.
On a whim, at the beginning of the summer, I had her try sea buckthorn fruit oil (internally).
Her skin had its best summer ever (since puberty)! Clear! I thought it might have also been that she was getting enough sleep and her stress was reduced. I wasn’t sure it would last once school started, stress increased and sleep was reduced.  But it did!
Then Piping Rock was out of stock on the sea buckthorn oil and she went without.  In about a week her breakouts increased.  And didn’t improve. So that’s where we are now. I ordered another brand and we’ll start it up and see how it goes.  Once the Piping Rock brand is back in, I’ll be stocking up!
[We did order another brand on Amazon that seems to have worked.  It took a bit for me to find one that was similar (the fruit oil vs the seed) and the same dosage AND not too pricey.  I’m very happy the Piping Rock sea buckthorn oil is back in stock.  The Teen wants me to stock up for the summer. ]
We seem to have found what works for her and it may or may not work for you or your loved one. But I am sharing in case it does!

This post may contains affiliate links, which means that if you click on one of the product links, I might benefit in some way. Please feel free to check out the full affiliate statement and disclosure here.